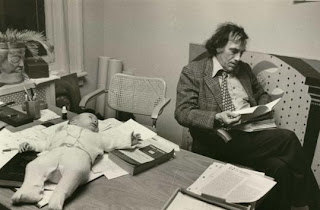 Last Thursday, I posted an announcement about (and the trailer of) the new documentary on William Kunstler currently playing at the Gene Siskel Film Center (see here). I went to see it on Friday and here is my review.

I think the film is excellent. But let's start with the basics. In case you don't know, William Kunstler was one of the most important civil rights lawyers of his generation. He was either an activist or a lawyer with the Freedoom Riders, the protests against the Vietnam war, the American Indian Movement, the Attica prison revolt and others. He represented "the Chicago 8" accused of causing a riot during the Democratic Party Convention in Chicago in 1968 and activists of all types. He also represented common criminals, mobsters and defendants noone else would dare be associated with.

The documentary does an excellent job of providing all that information, but the most important thing about this movie, in my opinion, is that it is not a biography. The movie is really a memoir from the perspective of Kunstler's daughters who struggled to understand him and his passion for his work and his clients. Kunstler was a radical, a lawyer, an activist, a public figure and a celebrity. But he was also a father and a husband. These are a lot of roles to play at the same time, even for a giant like him.

I met Kunstler many years ago when he briefly visited Puerto Rico to represent some Puerto Rican independence activists. I was familiar with his work and had admired it for a long time and was, quite frankly, "star-struck" to make his acquaintance. When he shook my hand and asked me "how are you?" the one thing that immediately struck me was that I realized he actually cared. He actually really wanted to know how I was. He wasn't just looking for me to say "OK", he wanted to know if I really was ok. I am sure I just said "fine" or something like that, but I am also sure that if I had said I was worried about the case (or something else for that matter) he would have spent some time with me talking about it.

There is a little spot in the movie when one of the interviewees says that if someone shouted an insult at Kunstler, he would stop and ask the person why he felt that way and that Kunstler would then spend some time talking about it. I know that is true, because he was that kind of a person. Even if he met you for just a few minutes, those few minutes mattered to him.

And years later, you would realize that they mattered to you too.

That, I think, is also the experience the Kunstler sisters are trying to describe in the movie. As they were growing up, they did not fully realize (or understand) why their father would represent criminals, why people gathered outside their door to yell insults or why they got threats in the mail.

Now, years later, they have put together this movie to answer those questions in a very touching way. Their father did what he did because he cared. He cared about justice. He was not a perfect father or husband or lawyer or person. He made mistakes and bad decisions. But he would not sit idly by while others acted; he acted.

The movie has some great footage both of the social events of which Kunstler was a central figure but also of family life in the Kunstler home. I was touched by the little clips of home movies of him playing with his daughters when they were little and by a famous photo of him working with one of the girls, then just an infant, lying on top of the desk looking at him. To me the movie is not just about lawyering, activism, history and politics; it is also about personal relationships.

In my Professional Responsibility class, I try to spend just a little bit of time teaching my students how important it is to really understand our roles as lawyers in society and how important it is to be able to explain it to others. We could take a lesson from Sarah and Emily Kunstler. In "William Kunstler: Disturbing the Universe" they have given us a very personal memoir that shows why it is so important.
Posted by Professor Alberto Bernabe at 12:52 PM