The ABA Standing Committee on Professional Responsibility just released a new ethics opinion on splitting fees with a client's prior attorney.  You can read (and download) the full opinion here. The summary reads as follows:

Posted by Professor Alberto Bernabe at 1:21 PM No comments:

Martindale-Avvo has published its 2019 compensation survey available here.  I am not sure it has any surprises, but there are a few interesting graphs.  Among them, the one that caught my eye was the gender gap (page 6).  The comment that accompanies the graph states:  "A gender-compensation gap exists among solo practitioners and attorneys employed at small firms, with female attorneys reporting receiving 36% less income in 2018 than their male counterparts. Some of this disparity may be attributed to the number of years spent practicing law, with female attorneys reporting substantially fewer average years (16.3) in practice than their male counterparts (22.7). A higher proportion of female attorneys also represent consumers, where reported income in 2018 was less than that of attorneys primarily representing businesses."

Also, with all the talk about alternative billing in recent years, some might be surprised to learn that more than three-quarters of respondents use an hourly rate structure to bill clients.  Flat fees is the second most popular billing method (see page 12).
Posted by Professor Alberto Bernabe at 12:35 PM No comments:

In my original post on this, I stated something along the lines of "Maine adopted the Model Rule" and several readers yelled "Objection" because Maine's adopted version of the rule is different than the Model Rule.

And they are correct.  Objection granted! So here is an updated post:

As you probably know, in 2016 the ABA adopted an amendment to Model Rule 8.4 to add a new section regulating conduct deemed to constitute discrimination or harassment.  See MR 8.4(g).

The new rule has proved controversial, and since its adoption by the ABA, only one state (Vermont) has incorporated it into its own rules. At least four states (Arizona and Tennessee among them) have affirmatively rejected it, and one or two more (Nevada and Pennsylvania) have abandoned efforts to adopt it.  (To read a little about why the rule is controversial go here, here, here, and here.)

Well, the landscape just changed a little because Maine recently adopted some aspects of the Model Rule.  In a prior post I stated the Maine had adopted the Model rule, but the rule adopted in Maine differs from the ABA Model Rule, so maybe it is more accurate to say that Maine adopted an amended version of the Model Rule.

Second, the Maine rule actually defines the concepts of discrimination and harassment as they apply to the rule.

Finally, there is one aspect of the new rule that I find confusing.  The Model Rule considers misconduct when a lawyer engages in conduct that the lawyer "should know" is discrimination or harassment.  This means the standard upon which it is based is negligence.  The Maine rule adopts this same language but in the definition of discrimination refers to conduct that the lawyer "reasonably should know manifests an intention" to engage in the conduct (as described in the rule).  Also, in the "Guidance" section below the rule, which is not part of the rule itself, it says that "the extent of enforcement or initiation of formal disciplinary proceedings will depend on "the level of intentionality" and seriousness of the conduct.  So, even though the language sounds like negligence, is the Maine rule based on intent?

You can read the text of the new rule as adopted in Maine here.

The ABA Journal has more on the story here.

Posted by Professor Alberto Bernabe at 1:09 PM No comments:

A couple of years ago, I published an article on an advisory opinion of the Legal Ethics Committee of the Indiana State Bar Association on whether a lawyer has a duty to disclose information regarding sexual abuse of a minor under Indiana law.  The opinion concluded that, absent client consent, in most circumstances an attorney has a duty NOT to report confidential information about child abuse.

As I argued in my article, because Indiana has a mandatory disclosure statute, this conclusion is wrong. You can read my article here.

I am writing about this today because I just heard about a case that is making its way through the Indiana disciplinary process which raises the issue.  And, given the fact that the opinion is still out there, I am worried about the possibility of the case making it to the courts and setting a bad precedent.

The complaint filed against the lawyer (available here) clearly sets out the facts of the case.  In a nutshell, here is what happened: the father of a 15 year old girl discovered that a teacher at her school had been propositioning his daughter and sending her “dick pics.”  Rather than going to pay a visit to the teacher armed with a baseball bat, which would have been my first reaction, or going to the police, which is what he should have done, the father went to talk to the “Head of Schools” (which I assume is either the equivalent of a principal or a school superintendent, but I could be wrong).  The Head of Schools, in turn, hired the lawyer in question to represent the school.

You can read the complaint for the rest of the facts, so let’s fast forward to what’s important.  Neither the lawyer nor the Head of Schools disclosed the teacher’s conduct to the authorities until the associate Head of Schools said it had to be done -- who said so the moment he heard about the problem for the first time.  Meanwhile, the lawyer tried to cover up the incident by offering settlement agreements and requesting pledges of confidentiality.

The problem here is that Indiana has a mandatory child abuse disclosure statute that imposes a duty to disclose on everyone, including lawyers.

Everyone means everyone, and only the Associate Head of Schools acted accordingly.  Even after the authorities became involved, the lawyer continued to mislead the investigators preventing access to information and evidence.  Some time after the incident came to light and the police intervened, the Head of Schools committed suicide.  The lawyer is now fighting for his license and may have to face charges of possessing child pornography.

Here is my concern: the opinion of the Indiana State Bar would condone the lawyer's conduct in this case.  Yet, the opinion is wrong because the statute is mandatory and, therefore, the lawyer had a duty to disclose according to the law, which would not have constituted a violation of the rules of conduct because the rules explicitly recognize that a lawyer can disclose confidential information when required to do so by law.

I hope the disciplinary authorities and, if it gets there, the courts, get it right.

The Legal Profession Blog has more information on the case here.
Posted by Professor Alberto Bernabe at 3:35 PM No comments:

In apparent violation of a long-standing federal court settlement, the Trump administration government has stopped paying for legal services and English-language courses at jails for immigrant children around the country, saying budget cuts make it necessary.

Courthouse News has more on the story here, as does Jurist (here) and Above the Law, which called the decision, the administration's latest act of pure villainy.
Posted by Professor Alberto Bernabe at 9:30 PM No comments:

In 2017, the ABA National Task Force on Lawyer Well-Being published a report on attorney well-being which described the wellness deficiencies that exist within the legal profession and called for critical self-examination and evaluation by the members of the profession.  Since then, many bar associations have sought to identify the signs of mental health problems, to identify resources for lawyers who need treatment, and to strengthen judicial and lawyer assistance programs.  However, according to a new report of the Virginia Bar Association, little has been done to identify the reasons that explain why lawyers experience wellness problems at a disproportionate rate when compared to the public as a whole.

To explore that question, the Virginia State Bar created a task force that set out to identify specific aspects or characteristics of the practice of law that might serve as a risk to a lawyer’s well-being.

The task force's report is now available here.  The report is relatively long - 80 pages - but you should take a look at its summary, which appears in the form of a very interesting and useful chart on pages 2-11.

The chart lists a long list of "occupational risks" involved in lawyering, and for each offers a list of potential effects on the individuals, as well as practice pointers for individuals and organizations to help minimize those effects.

The list of occupational risks is listed in the table of contents which I have copied below. 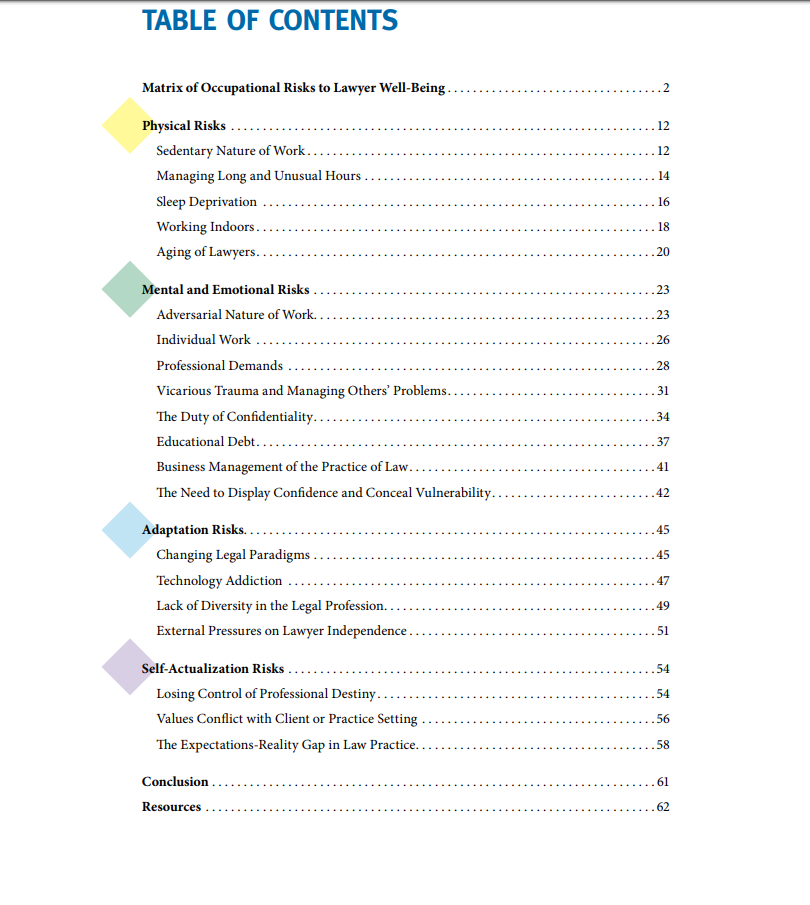 Posted by Professor Alberto Bernabe at 9:12 PM No comments:

Before submission to the Bar’s Board of Governors, the Committee requests comment on the proposed amendments summarized below. The Board, in turn, may then recommend changes to the District of Columbia Court of Appeals, which promulgates the D.C. Rules.

As of last year, 36 states had adopted the Model Rules' comment that adds understanding "technology" as an element of competence.

In my opinion, these are not controversial and should be adopted.

The most controversial proposal is to amend Rule 9.1, which prohibits discrimination by lawyers in conditions of employment based on a list of enumerated classes, to substantially align it with ABA Model Rule 8.4(g) addressing discrimination and harassment in conduct related to the practice of law.

I have written about this topic before and have expressed my doubts about the constitutionality of the Model Rule.  My original thoughts way back when it was proposed are here.  Although some of the problems I discuss there were addressed in the Model Rule that was eventually adopted, I think it remains problematic, and I still prefer the more limited approach currently in use in Illinois' Rule 8.4(j).

I suspect this proposal will generate a vigorous debate.

I wrote about this case here.  In it, the Court held that the District of Columbia's version of Rule 3.8 on "special responsibilities of prosecutors"  is broader than the duty imposed by the constitutional standards in Brady v. Maryland.

This appears to be the prevalent interpretation of the Model Rule in other states, but it is not the only interpretation.  Wisconsin, for example, has interpreted that the duty under the rule is not broader than that imposed by constitutional standards.  (See my post on this here.)

Another interesting proposal that may generate some debate seeks to amend Rule 3.8 and Comments to make them more closely aligned with ABA Model Rules 3.8(g) and (h), but with some significant differences. In May 2015, the District of Columbia Court of Appeals asked the Bar to reconsider paragraphs (g) and (h) of ABA Model Rule 3.8, which impose duties on prosecutors to disclose certain post-conviction exculpatory information, and to determine whether the District of Columbia should adopt similar provisions.

The proposal is to amend the Comments to Rules 1.1 and 5.3 to address a lawyer’s duties when outsourcing legal work or when using “outside” or contract lawyers. The proposed changes include language requiring the lawyer to inform the client about the identity of the other lawyers who will participate in the representation and the contemplated division of responsibility among them, as well as amendments to better address situations where the client, not the lawyer, is directing the outsourcing.

For Information and to Submit Comments

More information about this call for public comment, including the Committee’s final draft report and recommendations, can be found here.


UPDATE 6-2-19:  Michael Ambrogi, of Law Sites, a website in which he comments on issues of technology and the law, has published a comment on the proposed changes here.
Posted by Professor Alberto Bernabe at 8:48 AM No comments: