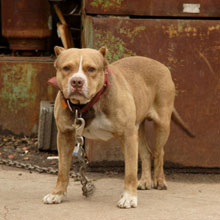 March 13, 2021
The ABA Journal is reporting that a Florida lawyer is facing an ethics complaint for describing himself as a pit bull lawyer and using an image of a pit bull on a blog and a Facebook page. The lawyer also used the name “Pitbull” on business cards and on the door to his office.

The complaint apparently argues that using the pitbull image and nickname harms the legal profession and the public’s trust and confidence in our system of justice.

I don't like pitbulls and I think that calling yourself a pitbull lawyer in advertising is tacky, but trying to impose sanctions for it is nonsense.  I don't know what the specific Florida rules say, but the notion that the state can impose sanctions for protected speech merely because it harms "the image of the profession" and the "trust in the system" is a very weak argument.

The standard by which commercial speech is evaluated has been established for ages.  As the US Supreme Court has explained:

Our general approach to restrictions on commercial speech is . . . by now well settled. . . .  Commercial speech that is not false or deceptive and does not concern unlawful activities, . . .  may be restricted only in the service of a substantial governmental interest, and only through means that directly advance that interest. . . . Our application of these principles to the commercial speech of attorneys has led us to conclude that blanket bans on . . . advertising by attorneys and rules preventing attorneys from using nondeceptive terminology to describe their fields of practice are impermissible . . . but that rules prohibiting in-person solicitation of clients by attorneys are, at least under some circumstances, permissible.

Zauderer v. Office of Disciplinary Counsel, 471 U.S. 626, 638 (1985).  Arguing that protecting the image of the profession is a substantial governmental interest is akin to saying that the speech can be banned because someone may find it offensive, and if we know one thing about the First Amendment, it is that it is there precisely to prevent from punishing speech because someone finds it offensive.
UPDATE (3/21/21):  The Louisiana Legal Ethics Blog has a comment here suggesting that the same conduct would probably not be subject to discipline in Louisiana because the rules in Florida are stricter.  I suspect this is the case pretty much everywhere else.
Posted by Professor Alberto Bernabe at 11:26 AM